The capital city of the state of Rio Grande do Norte, Natal began as a fortress (Forte dos Reis Magos) built by the Portuguese in 1598 to fight French invaders. During World War II, Allied Forces recognized its strategic location on the Eastern bulge of Brazil, and turned Natal into the allied military base for operations in North Africa. Natal is known for its endless beaches, and sunshine year-round. Hotels line the coastal road south of the city, reaching the Morro do Careca sand dune at Ponta Negra Beach. Tourists can make jangada boat trips and sample the delicious seafood dishes in restaurants along the beach. To the north, the sand dunes and Praia of Genipabu are a major attraction. Take a 3-hour dune buggy tour which will include breathtaking rides in the dunes park, and visits to surrounding beaches. 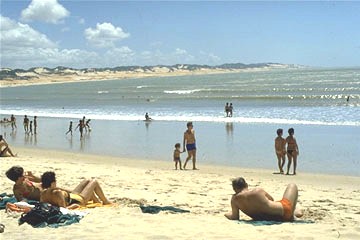 Book a Tour Package to Natal