Belo Horizonte is Brazil’s 3rd largest city (pop. 2. 7 million) and capital of the state of Minas Gerais. The city’s creation was inspired partly by the example of Washington, D. C. , and was founded in 1897 in order to replace Ouro Preto as the state capital, being built on several hills, completely surrounded by mountains. Belo Horizonte features a mixture of contemporary and classical buildings, and hosts several Brazilian architectural icons, most notably the Pampulha Complex. In the 1940s, a young Oscar Niemeyer designed the Pampulha Neighborhood to great acclaim, a commission he got thanks to then-mayor, and soon-to-be president Juscelino Kubitschek. These two men are largely responsible for the wide avenues, large lakes, parks and jutting skylines that characterize the city today. Belo Horizonte is a stopover point for travellers visiting historical cities such as nearby Sabará and Diamantina, and an hour to the south the very important Ouro Preto, Mariana and Congonhas, and farther to the south Tiradentes and São João del Rei. 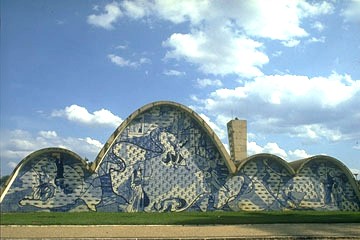